The city stands over a gentle hill of “Murge”. The Aragonese castle, on the hilltop, dominates the city; in front of it, the majestic Cathedral and the “Belvedere” square (in the ancient time called “the Palo”) where is possible to enjoy the panorama of the countryside and behind it is possible to see the Adriatic Sea, just 8 km far from the city.

The old district develops along the hillside and continues until the valley where meets the modern part of Conversano.

A valley completely surrounded by greenery lands, full of olive, almond and cherry trees and the typical enclosed plot of lands, the characteristic walls made “a secco”, ancient  delimitation of our region. Through the suggestive trails is possible to arrive at the numerous lakes all around the city.

Ciao Hotel Residence stands just few hundred meters far from the centre, between the wonderful castle and the monastery of the “Madonna dell’Isola”, a convent that, following the legends, hides a secret, mazy passage that develops under the city and arrives at the castle.

Ciao Hotel Residence, with its spacious and comfortable Suites  let to spend in total relax your own business or pleasure visit in Conversano and discover  wine and food of Apulia, in a territory rich of genuine

Of really ancient origin, Norba is dated from the Iron Age (VIII-VI B.C.)

We  don’t have too many information about its ancient history but, following the few trails we have, like the megalithic walls and some archaeological rests, certainly there was a strong fortified village in the middle of some old commercial ways, where lived old population like the Peucezi, the Pelasgi and the Japigi. 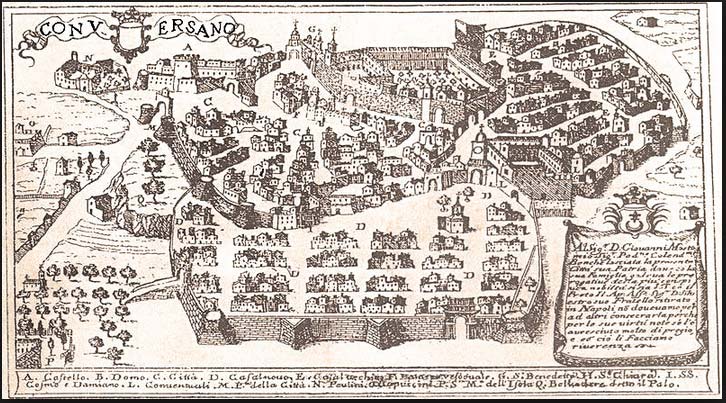 Thanks to its excellent geographical collocation, Norba became part of the Roman Emperor and underwent its cultural and technological influences and after the decline with the barbarian invasions.

Were Dark centuries for all the apulian territory, a lot of populations and different men of war took the control of the land; all the commercial ways, once so prosperous, were assaulted by pirates and robbers.

The old city almost completely destroyed, was repopulated and rebuilt and, starting from the V century A.C., we have notices about a town called “Casale Cupersanem” that thanks to the Normans, became one of the most important countries of the entire Italian peninsula, starting from XI century.

From this date (1054) and for 4 centuries later, we see different families take control of the city.

Starting from the Altavilla until Bassavilla, the Brienne (Gualtiero IV of Brienne start to build the “Casal Vecchio” in the 1338) followed by the D’enghien and with the Lussemburgo we assist to the enlargement of the castle.

Around the 1422 the County passed in the hand of Orsini family and below to Giovanni Antonio Orsini (prince of Taranto and Bari) that gave the County to his daughter like dowry for her marriage with Giulio Antonio Aquaviva d’Aragona.

King Ferdinand I granted Acquaviva’s descendant to add the real name of Aragona thanks to the count’s merits of war.

Starting From this moment during 4 centuries  we see the alternation of 19 aragoneses counts, period of love’s affairs and heroics deeds until arrive to the famous Gian Girolamo II, better known as “the squint eyed of Apulia”.

He was a violent general and a refined patron, he applied ancient feudal privileges like the “ius primae noctis” (for this reason came the conversaneses nickname; Sons of the count).

Conversano hosted also one of the most fascinating and controversial monastic complex of the history of the Christianity, the “Monstrum Apuliae”, centre of the powerful Mitrate Abbesses nuns.

Those abbesses, the only ones could wear male religious symbols like mitre and pastoral staff, were under the direct control of the Pope and had feudal rights and privileges over some territories, including Castellana. Moreover they had also the big privilege of the hand-kissing.

Alberobello, city situated in the middle of the Itria valley, land famous for the stone and above all for the “Trulli”, singulars buildings made of “Calcina” and with a conic roof of “chiancarelle” (particular types of stone).

The “Trullo”, morphologically and structurally old that is present everywhere in Apulia like isolated cases, constitutes all the old centre of Alberobello starting from the centuries XVI and XVII.

Is the only centre in the world made entirely of trulli for the Conversano’s counts decisions, first of all Gian Girolamo II “the squint eyed of Apulia”.

During the 1996 Alberobello took part of the U.N.E.S.C.O. world heritage programs.

Bari situated over a small promontory of the Murge’s hills looks toward the East, is the chief town of the region, city full of architectonical and cultural testimonials of big interest.

In the famous “Bari Vecchia” the old district of the city, is possible to admire the Apulian Romanic style churches, the baroque decorations of its palaces and the wonderful San Nicolas church.

Castellana grotte born in the middle of an interesting karst area, it was the city of the Mitrate Abbesses nuns , now famous all over the world for its fantastic caves.

Discovered in the 1938, the caves gives a fantastic speleological itinerary made of stalactites and stalagmites, tunnels and cavities; the most famous cave is the “Grotta Bianca”, defined the most splendid in the world.

Castel Del Monte, building dating back to 1240, stands on the top of a hill and surrounded by forests and is certainly the most famous testimonial of the particular artistic and architectonical point of view of the magnificent Frederick II of Svevia.

We don’t know yet what this castle were used for, characterized by an orthogonal structure with its eight towers that make an unforgettable game of lights and shadows.

Trani, famous for its limestone stands over a large natural bay.

The Swabian castle that  thanks to a recent restructuration has discovered the old brilliant colours, looks the Cathedral that, like a sheep anchored to the cliffs with its high bell tower, make unmistakable  the view of this old town.

Ostuni: the famous “White city” for the brilliant colour of its buildings, stands between sea and hills in an area full of olives trees.

Like the big part of the medieval apulian cities is surrounded by defensive walls and cylindrical towers.

Little streets, stairs and arches led to the Cathedral, built during the XV century.

Lecce is a city famous above all for its architectonical characteristics and for its fantastic baroque monuments of its old district.

Mazy streets and little squares surround important palaces and buildings like the Santa Croce church, where the apulian Romanic style meets the Baroque and the most important church “the Duomo of Lecce” that is an excellent example of the baroque in this part of Apulia.

Matera “Città dei Sassi” stands in front of a ravine created by the corrosion of the river’s water.

Is most emblematic example of troglodytic city, where men used natural caves for domestic uses.

Matera is an important centre for prehistoric, romans, medieval and baroque archaeological rests.

Putignano: stands on the top of a hill of the Murge.

Economically and institutionally is one of the most important cities in the province of Bari.

Putignano is famous for its Carnival (the oldest in Europe) where there is a parade with a lot of  papier-mache floats surrounded by old and new masks that gladden all the people with dances and music.

Polignano a mare: stands on the top of a high rock, drop over the sea, is one of the most beautiful cities of the Adriatic Sea.

The old district gives corners of extraordinary beauty, crossing by a maze of street until the wonderful terraces sheer to the sea.

A deep “Lama” divides the city and gives spectaculars effects.

Polignano is also the city of the singer Domenico Modugno, better known as Mr. Volare, which is dedicated a statue that with open arms sings yet his songs inspired by the sea.

Monopoli for its strategic position in the past the city received a lot of attacks from pirates and during the medieval Age. Later the city was repopulated during the Byzantine and Norman periods. Starting from 1006 became seat of bishops and arrived to a big prosperity under the control of the Spanish and venetians.

Of large historical interest are the Cathedral dating back to 1742, built  for Romualdo bishop’s decision and the castle of Charles V, fort edified during the Spanish domination (second half of XVI century) for better defend the entrance of the old port.

This fort with the S. Stephen Castle was the last bulwark against all the enemy attacks from the sea.

Contacts
Ciao Hotel staff will be happy to answer your requests for information or reservations from channels below.
This website uses cookies to improve your experience. We'll assume you're ok with this, but you can opt-out if you wish.Accept Info
Privacy & Cookies Policy
Necessary Always Enabled